To clarify the people in the photos in the photo with Stephanie on the horse; the horse is Butch a mixed breed pinto owned by Lynne Harbke. She is my riding partner and believe it or not she’s 74yrs old. Believe me she’s defying the laws of gravity.

The dear lady with the grey hair is Penny Barrett, my landlady and Stephanie’s “mother”. Penny started every gringo organization here in Boquete and is an expert at raising money for charities such as the Foundation for the Handicapped and many others.She’s a whirlwind of action and more action.

Ron Larson is an former marine who has lived in many places including 10 yrs in Japan. He’s married to a Japanese woman whom he met in California and has 2 sons and 2 grandchildren. Ron is a very talented writer having written some screen plays and many short stories. He has become an advocate for Alberto;started the “Go Fund Me” site and is ruffling some gringo feathers with his brutal honesty about the neglect, mistreatment and general lack of concern for Alberto and indigenous people in general.We have great rants together; sadly he’s returning to the U.S. at the end of the month to be with his brother who has pancreatic cancer.

The sweet girl at the table is Milagro who is a bright and promising 13 yr old. She was rescued from a very abusive mother by an employee at the Foundation and comes for English lessons.

The little boy with his dog is Filippe; he has Down’s Syndrome and is the sweetest ever.The dog is amazing and is his guardian I must ask what his name is.

I would go to the Foundation just for the hugs. It’s a family full of warm fuzzies

They keep changing the format on WP and I’m again confused.

The photos are of our Saturday morning English Class. The two men are (left) Celestino and Alberto (right).

Celestino is 62yrs old. He crashed on his motorcycle 15 yrs ago and lost the use of his legs. He is very handsome , intelligent and fun to be with. I’m not sure of the whole story but he lives alone and his best friend is his dog Zingo. He has electricity and listens to the radio; he takes care of himself and is a great English student. He was married and has two sons who live in Panama City. He has three sisters who are  helpful. I really enjoy seeing him on Saturday. Apparently his family own land and therefore he doesn’t qualify for any social assistance which would come to a whooping $80 /m.

Alberto has a tragic story. He is Ngobe-Bugle the indigenous tribe of Chiriqui, Veraguas and Bocas del Toro provinces. Most of these people live in deplorable conditions. For 10 yrs Alberto was a gardener for a ritzy B&B here in Boquete. His salary was $250/m. He fell out of a tree a year ago and is now paralyzed from the chest down. He has 9 children; the extended family live up the hill across the street from me. They have one structure made of tin and wood, no electricity, must haul water, one outhouse and a cold shower rigged up outside; all for about 40 people. There is an extremely steep climb to get to his place and it’s often impassable because of the rain. To get him down the stronger ones carry him in a hammock. I’ve even seen them hauling him up in his wheelchair. His most illustrious American employers gave him 2 months salary and washed their hands of it all. They paid social security for him which he has yet to collect as the Panamanian Wheels need some grease. I’m so impressed with his strong spirit, sense of humor and his love of learning.

The next photo is of Ron Larsen whose face you can’t see and the lovely Stephanie. Stephanie is doing a little better thanks to some help from some friends. Thanks so much ! You know who you are! She now has a computer(2nd hand), a new 2 burner stove, toaster oven and T.V.  as well as 2 months  school bus paid. She continues to struggle but is so brave and I can see some good things happening for her in the future. We managed to get her on a horse; she loved it and we’ll do it again. 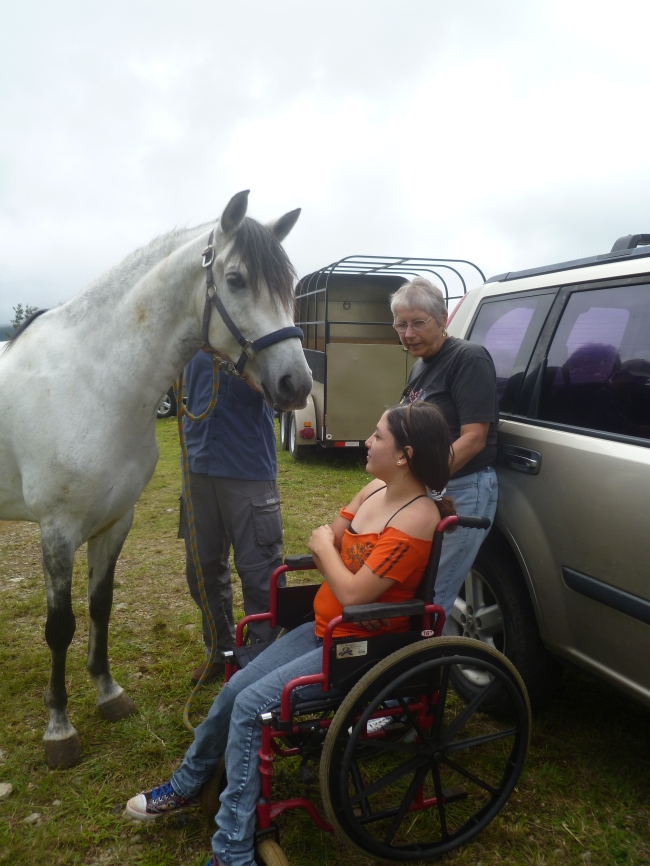 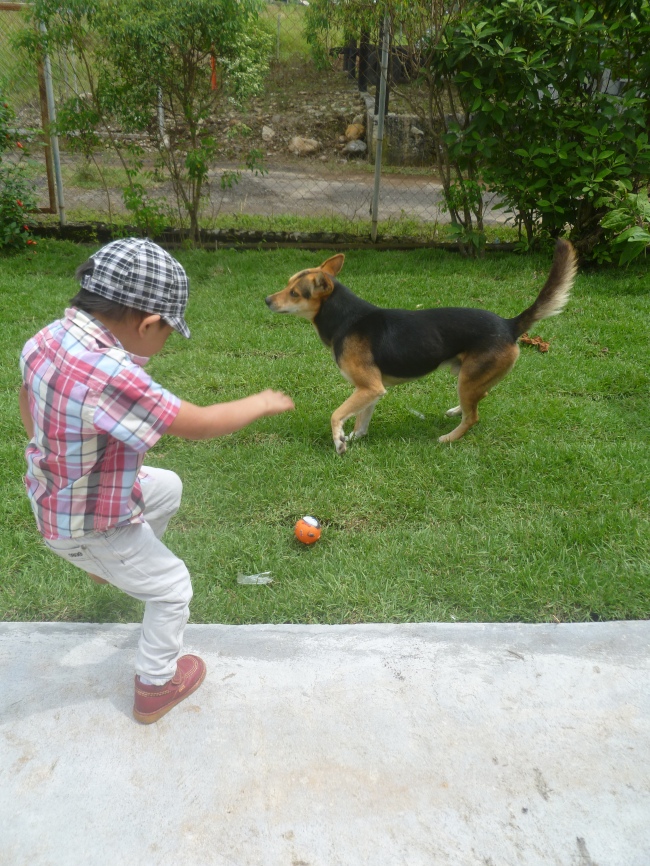 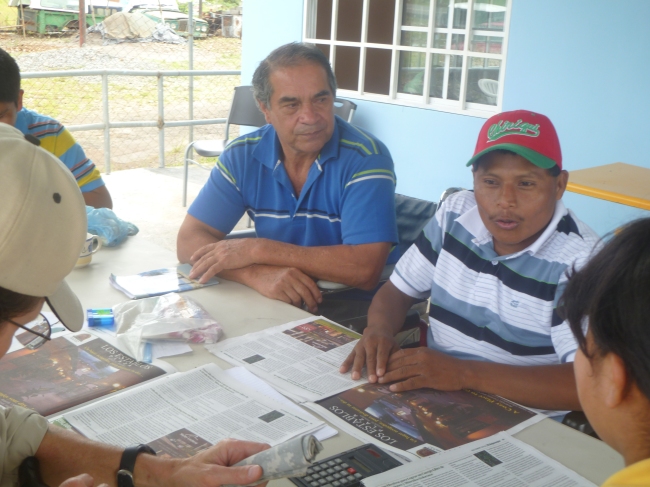 I’ve often contemplated loneliness, oneness, being apart and many other thoughts on what exactly is being at one with ones self. We’ve all encountered loneliness in our lives and met people who have touched our lives. Since leaving Canada I’ve experienced loneliness many times in many ways. Most of us have family, friends, partners etc so the loneliness must not be permanent or a state of irretrievable entity.

Becoming involved in Stephanie’s life has give me an idea of what alone really means. Tuesday when I went to see her for my Spanish lesson she totally broke down. I held her as she cried and cried. She thinks she’ll be alone in her house, helpless with no friends, no employment, no money and no future. She goes to night school and the other students make fun of her; more than anything she wants to walk and be free. At the very least she wants to have an education and to be able to support herself.

Today I went for my Spanish lesson and she was outside washing her clothes by hand in a bucket. She has no hot water; she tries to wash the clothes and wring them out then hang them on a clothesline. Her wheelchair only reaches a small part of the line. We did her laundry together; she has only one school uniform and it must dry by tomorrow. She needed to shower; she has to lift herself from her wheelchair on to her toilet , then on to a seat by the shower.The shower is leaking and cold. She asked me to wash her hair; she has beautiful almost waist length hair. I was freezing and I was dressed. Her tiny body was shaking with cold. She asked me if I’d like to live with her. The answer breaks my heart.

Her phone is not working. she has no T.V. internet and as I accustomize myself to her house it is so dirty. The dogs are her friends she has  little Ringo, Estrella and Goodie. Goodie is a male yellow lab, beaten up street dog she has adopted. She has Penny and I and a very nice man named Ron Larsen. Ron and I are going to clean and paint  her house. Ron is doing her yard. Her worst enemy is loneliness. I must spend more time with her and it is no hardship. Yesterday she gave me a gift of Avon lotion which is precious to her. I told her I was allergic to it. Life is so unkind to so many. 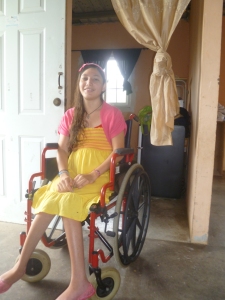 Working with orphans and disabled people is a new part of my life and one that has truly opened my heart.

It’s the cliche thing “walk a mile in my shoes” but until you do you just don’t know anything. My landlady Penny, for whom I have the utmost respect, has been here for ten years and has started every gringo organization here. Through her I began volunteering at “Fundacion Integracion”( politically correct name) Saturday mornings. It is the only handicap facility in Panama I’m sad to say. It only runs on Saturday and it was started by a very wealthy American couple who happen to have a coffee plantation that grows the most expensive coffee in the world “Geisha”. Others are apparently growing it now but they were the pioneers here. They also have  huge dairy farms and thankfully the cows are outside. The facility is a small building with a main room, a large kitchen, three side rooms and a bathroom area. On Saturdays people come from all over to bring their children, parents and friends who are disabled. Volunteers play games, teach English (me) and there is a wonderful woman who brings her massage table giving great massages to any takers and there are many! A wonderful hot meal is served at noon and many have to be fed.

Stephanie is Panamanian, 23 yrs old and was born with cerebral palsy. Her mother had 4 children from different fathers. She has 3 younger siblings. Stephanie was told her father is a doctor but he she doesn’t know him. Penny believes that she is disabled because of a botched abortion. When Stephanie was 15 her mother committed suicide; the common way here is to swallow roundup which as you can imagine is excruciating. It was agreed by Stephanie’s 3 aunts that she would spend a year with each one. The first 2 have 1 room shacks with no electricity or water. The first 2 years were hideous for her because there was nothing for her to do and especially no school which she loves.The 3rd year she went to the only aunt that has a decent home but she was mistreated there. Penny met her when she was 17 yrs old and was taken by her as I am. Penny with her connections managed to have a tiny house built for Stephanie; a tiny 2 bedroom 1 bath home which she loves. She is presently living alone; she did have a couple with 2 children living there ( all in the little spare room ) but they weren’t paying the rent $40/ m so she asked them to leave. Her only income is from a shack that her mother owned which she rents for $40/m. Penny would really like her to have a roommate as she does need some help. She can do most things herself but it takes forever. Also she needs to be lifted on to the bus or into cars. Penny is concerned because she’s 69 yrs old and she doesn’t know how much longer she’ll be able to lift her.

Penny pays her utilities($ 5/m) and brings dog food as well as some food for Stephanie. There is an organization that delivers dry food once a month to needy people so she has rice ,beans etc. What she wants more than anything is to go to university. I have hired her to teach me Spanish for $5/hr so that’ll help a little. I had my first lesson yesterday and she is a great teacher. She is a block off the highway so I grab a collectivo cab which cost me .70c yesterday. It depends what driver you get it could be as high as $1.50. Sadly she really has no family and doesn’t know her siblings. She calls Penny “Mom”. Fortunately she loves dogs and has a little shaggy gold dog called Estrella (star) and an adorable little puppy Ringo. Ringo will be going to the next spaying and neutering clinic to have his eggs removed as they say here.

Below  her little white house and her puppy.